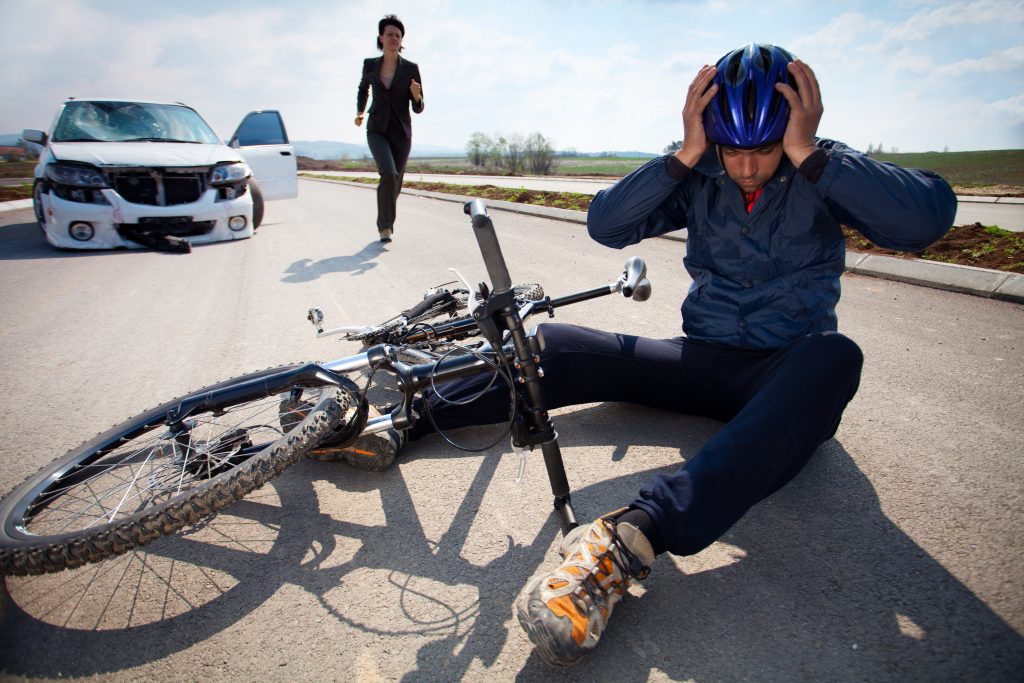 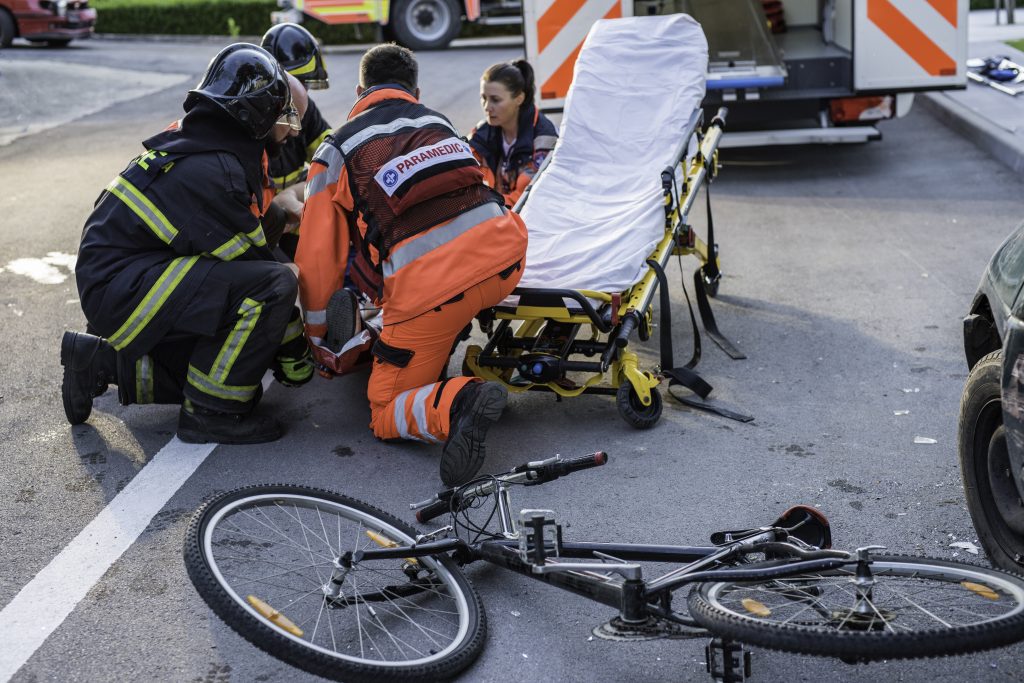 Riding a bicycle can be a favorite activity or living for people in the beautiful Northwest.  Not only is it a fun activity, it’s great exercise!  People are bicycling to work and for recreation much more regularly due to environmental and personal health reasons. While Washington State, specifically Western Washington, has designed their roads to be bicycle friendly and ranks as one of the most bicycle friendly states, bicycle v automobile collisions are not uncommon. Due to the local and state governments’ push to make bicycling more available to commuters and recreational riders alike, there is likely to be more use, meaning more accidents as well.

Being struck by a moving vehicle is traumatic. While there are several things that should be done quickly if you have been in a car accident, such as obtaining their insurance and driver’s license information, taking photos, and contacting your insurer, the most important thing is the health and wellbeing of all of those involved in the collision. If you are experiencing any physical or psychological symptoms following being struck by a motor vehicle, it is strongly encouraged that you present to a medical provider for evaluation and any recommended treatment.

If you have been in a bicyclist accident and have any legal related questions, please feel free to reach out to Charles McNeese and Adam Trotsky for a free phone, video, or in-person consultation. We look forward to answering any of your questions.

(2) These regulations applicable to bicycles apply whenever a bicycle is operated upon any highway or upon any bicycle path, subject to those exceptions stated herein.

(2) Every person riding a bicycle upon a sidewalk or crosswalk must be granted all of the rights and is subject to all of the duties applicable to a pedestrian by this chapter.

All hand signals required of persons operating bicycles shall be given in the following manner:

(1) Left turn. Left hand and arm extended horizontally beyond the side of the bicycle;

(3) Stop or decrease speed. Left hand and arm extended downward beyond the side of the bicycle.

The hand signals required by this section shall be given before initiation of a turn.

(1) A person propelling a bicycle shall not ride other than upon or astride a permanent and regular seat attached thereto.

(2) No bicycle shall be used to carry more persons at one time than the number for which it is designed and equipped.

No person riding upon any bicycle, coaster, roller skates, sled, or toy vehicle shall attach the same or himself or herself to any vehicle upon a roadway.

(1) Every person operating a bicycle upon a roadway at a rate of speed less than the normal flow of traffic at the particular time and place shall ride as near to the right side of the right through lane as is safe except:

(a) While preparing to make or while making turning movements at an intersection or into a private road or driveway;

(b) When approaching an intersection where right turns are permitted and there is a dedicated right turn lane, in which case a person may operate a bicycle in this lane even if the operator does not intend to turn right;

(c) While overtaking and passing another bicycle or vehicle proceeding in the same direction; and

(d) When reasonably necessary to avoid unsafe conditions including, but not limited to, fixed or moving objects, parked or moving vehicles, bicyclists, pedestrians, animals, and surface hazards.

(2) A person operating a bicycle upon a roadway or highway other than a limited access highway, which roadway or highway carries traffic in one direction only and has two or more marked traffic lanes, may ride as near to the left side of the left through lane as is safe.

(3) A person operating a bicycle upon a roadway may use the shoulder of the roadway or any specially designated bicycle lane.

(4) When the operator of a bicycle is using the travel lane of a roadway with only one lane for traffic moving in the direction of travel and it is wide enough for a bicyclist and a vehicle to travel safely side-by-side within it, the bicycle operator shall operate far enough to the right to facilitate the movement of an overtaking vehicle unless other conditions make it unsafe to do so or unless the bicyclist is preparing to make a turning movement or while making a turning movement.

(5) Persons riding bicycles upon a roadway shall not ride more than two abreast except on paths or parts of roadways set aside for the exclusive use of bicycles.

No person operating a bicycle shall carry any package, bundle or article which prevents the driver from keeping at least one hand upon the handlebars.

(2) Every bicycle shall be equipped with a brake which will enable the operator to make the braked wheels skid on dry, level, clean pavement.

(a) Transport the intoxicated bicycle rider to a safe place; or

(b) Release the intoxicated bicycle rider to a competent person.

Washington State requires all drivers to maintain liability insurance to operate a vehicle.  While there are numerous types of car insurance, Washington drivers are required to carry a minimum of $25,000/per person and $50,000/per accident of liability insurance to cover victims of their negligence while operating a vehicle.  Washington State also requires that an insurer offer their insured drivers the opportunity to purchase both Uninsured/Underinsured Motorists and Personal Injury Protection coverage, and must produce written rejection of both coverages, otherwise this coverage will be provided to their insured, irrespective of if the premiums paid included these types of coverage.

Personal Injury Protection coverage will cover necessary, related, and reasonable medical expenses incurred due to injuries suffered in a car accident, up to the policy limit, which is a minimum of $10,000 in Washington State

Another important car insurance coverage is rental car coverage; if you don’t have rental car coverage, the at-fault parties’ coverage should provide a rental car or a rental car stipend for the time you are unable to use your vehicle.  A recent case in Washington has decided that a victim of a car accident, who will be without their car due to its inability to operate or due to repairs, is entitled to either a rental car of comparable value or a stipend based on this amount.

There are two primary questions regarding car accident claims.

If the claimant can show the collision was at least partially the fault of the other driver or drivers, there is a claim for damages.

What are the Damages?

If there is fault to be apportioned to another driver, the next question is what are the damages. In personal injury claims, there are two primary areas of damages:

1) Special Damages are damages that a specific number can be put on, such as lost earnings, loss of future earnings, property damage, and medical bills

2) General Damages relate more to pain and suffering, including psychological and emotional damages